The first international scientific & business conference on the European patent with unitary effect and the Unified Patent Court to be held in Poland soon! 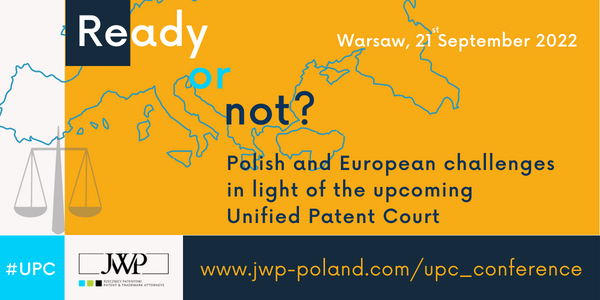 We are witnessing the most substantial changes in European patent law since its inception. As announced, the European patent with unitary effect will soon become operational, and with it the Unified Patent Court (UPC) will be launched. The establishment of an international civil court before which entrepreneurs from different countries are to be represented as parties will affect the way commercial activities in Europe are conducted by most companies and research institutions.

The introduction of the European patent with unitary effect and the establishment of the Unified Patent Court offers new opportunities and prospects for actions for European patent holders. However, the question arises as to what strategy to adopt in order to effectively protect inventions: to choose a “classic” European patent, which in order to remain in force requires actions to be taken separately in each designated country, or (after a European patent has been granted) to request for its uniform effect from the start, so that it is valid simultaneously in several EU countries?

The introduction of the European patent with unitary effect system will also significantly affect the activities of other parties. An entrepreneur who violates such a patent will risk losing several outlets for his product, because the UPC’s ruling will apply simultaneously in several EU countries. In such a case, other important questions arise: how to operate on the market without infringing upon European patents of others and how to defend oneself in the event of litigation?

JWP Patent & Trademark Attorneys seek to prepare Polish and European entrepreneurs for the upcoming changes, first of all by providing them with practical knowledge as to how to function as part of the new system. Therefore, on 21 September 2022 – on the occasion of the 30th anniversary of JWP Patent & Trademark Attorneys – the first international scientific & business conference on the European patent with unitary effect and the Unified Patent Court entitled “Ready or not? Polish and European challenges in light of the upcoming Unified Patent Court” will be held.

The conference will be attended by eminent representatives of the world of science from all over Europe with expertise in patent protection, as well as professional attorneys and entrepreneurs. The event will also include a debate with representatives of business, science and R&D sectors. The conference will be hosted by Tomasz Gawliczek, PhD, patent attorney and attorney-at-law (scientific panel), and Piotr Godlewski, Polish and European patent attorney (business panel).

Poland has not yet joined the unitary patent protection system, however, Polish entities may decide to protect their inventions under the new system, and they may be parties to litigation pending before the Unified Patent Court. Hence, it is worth learning how to prepare oneself for the upcoming changes.

Participation in the virtual conference is free of charge. You can register HERE.