Global patent filings for electric vehicles are rising, while those for petrol and diesel vehicles are falling rapidly as the 2030 deadline for the end of carbon-emitting car sales gets closer, says leading intellectual property law firm Mathys & Squire.

Mathys & Squire says that 14,000 global patents for electric vehicle technology were filed with the World Intellectual Property Organisation (WIPO) in the last year*, an increase of 59% on the 8,794 filed five years earlier. In contrast, the number of patents for fossil fuel vehicles has fallen to 24,801 in the past year, a decline of 19% on the 30,499 filed five years ago.( See table below). 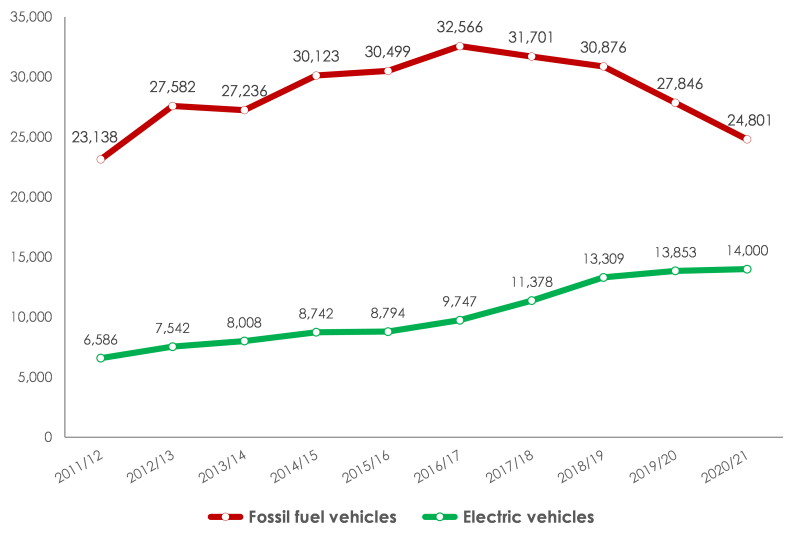 The firm says the figures show that there remains much to play for in the electric car industry. The rise in global patents filed for electric vehicles has been much more gradual, increasing by just 4% and 1% in the last two years. Sean Leach, Partner at Mathys & Squire, says that much innovation is yet to be done to bring truly affordable electric cars to all consumers, as manufacturers must do over the next decade. The cheapest new electric car** available in the UK is currently priced at £19,795, compared to £7,995 for the cheapest new petrol car.

He adds that it will be interesting to see whether patent filings for fossil fuel vehicles fall more quickly as more countries and cities put in place challenging deadlines for the end of new petrol and diesel car sales. The UK, Germany, India, Netherlands, Denmark and Sweden are among the countries that have committed to a deadline of 2030, while the US, Japan, South Korea and Canada have 2035 deadlines.

Sean Leach says: “Electric vehicle innovation has picked up some speed but not as much as many would have hoped.”

“With the end of new fossil fuel cars now less than a decade away in a number of major economies, some will be surprised to see patents for petrol and diesel vehicles only starting to fall more sharply in the past two years. The product development cycle is long in the automotive industry and it is still going to take some time for a few carmakers to really pivot to electric vehicles.”

Mathys & Squire says that organisations in the United States were the most prolific filers of global patents related to electric vehicles last year,.  Data shows that the US registered 49% of all global EV patents at WIPO (6,827 patents in 2020/21). By these same measures, Chinese filers are the second most prolific, filing 28% of all global electric vehicle patents in 2020/21 (3,901 patents).

The US has long been a hotbed of electric vehicle innovation, with Tesla and businesses in its supply chain playing a key role in commercialising fully-electric cars.

The United Kingdom saw a comparatively tiny number, with data showing as few as 65 patents for electric vehicle technology were filed in 2020/21. This makes up only 0.4% of all filings in the category at WIPO. The list of leading UK filers is dominated by lithium-ion battery development businesses, and the Government is hoping to increase UK innovation in this area through the UK Battery Industrialisation Centre in Coventry, which opened in July 2021.

Adds Sean Leach: “This picture is worrying, but statistics alone don’t tell the whole story. UK engineering experts and entrepreneurs are already making the UK a hub for electric vehicle development. The UK Battery Industrialisation Centre is a significant step forward in that regard, but once it has been developed, new technology must be protected if it is going to provide real value to business over the long term.”

“We hope to see the number of EV patents from UK filers rise – there are some very innovative UK businesses in the battery supply chain in this country, and they need to keep pace with their German, US and Chinese counterparts.”

About Mathys & Squire
Founded in 1910, Mathys & Squire is one of the leading full-service intellectual property law firms in Europe, with over 110 years of experience in the protection and commercialisation of IP rights.

The firm has more than 60 qualified attorneys and offices in London, Paris, Munich, Luxembourg, Cambridge, Oxford, Manchester, Birmingham, Brighton and York as well as teams based in China and Japan.