With the European Commission acting as legislator and regulator, and the European Parliament and Council representing the European executive power, Brussels is home to some of the main European institutions as well as lobbyists. 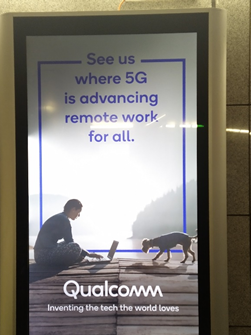 One from Vaccinate Our World, simply stating that “Patents kill”. The other from Qualcomm, about 5G technology and “Inventing the tech the world loves”. Patent bashing versus promotion of innovation made possible partly thanks to and with patents.

Indeed, Vaccinate our World assumes that patents are the reason developing countries are not accessing vaccines and advocates for, among others, a patent waiver. Such view disregards the fact that a patent waiver will not resolve manufacturing challenges, i.e. access to ingredients, availability of production sites and staff, management of a complex supply and production chain. It also misunderstands the role of patents as an innovation enablers: patents bring partners to collaborate on technological evolutions; attract investors injecting funds in early stage startups supporting them in risky, long and expensive development of potential life-saving treatments, as well as licensees to generate revenues that will then be invested in further R&D. Finally, patents on vaccine protect us from counterfeit jabs, which is a matter of public health.

On the contrary, Qualcomm’s ad is an indirect promotion of patents. Qualcomm is a company known for licensing out its standard-essential patents (SEPs) and being one of those companies investing in standards used all over the world partly through patent licensing revenues. Patent licensing brings revenues that support heavy (22% according to their March 2021 10-Q form) R&D investments.

Patents may not be free from abuse (and Qualcomm has been subject to licensees’ complaints regarding their licensing terms and conditions). However, this does not mean they should be waived. Antitrust law, regulators and courts are here to tackle anticompetitive behaviors hindering competition and access to essential facilities.

National courts, the Court of Justice of the European Union, various national Supreme Courts have been busy with patents and SEPs litigations. The European Commission, the Federal Trade Commission, and other regulators are assessing antitrust behavior complaints relating to the exploitation of patents (including SEPs).

Moreover, international treaties provide for exceptions to patent law for signatory states in case of national emergencies such as Covid. Article 30 of the Agreement on Trade Related Aspects of Intellectual Property Rights (TRIPS) states that member states can provide for “exceptions to the exclusive rights conferred by a patent.” Article 31 TRIPS specifies that Member States laws may allow for compulsory licensing, even without the authorization of the patent-holder in the case of national emergency or extreme urgency. Therefore, any TRIPS member state could have implemented in its own legislation a compulsory licensing mechanism to access Covid vaccine patents.

Waiving patent rights will lead to less innovation: it will lower revenues and consequently R&D expenditures. It will hinder collaborations and investments in risky tech that can change lives. This is not the world Vaccine Our World are wishing for.

We as IP professionals have a role in promoting patents and highlighting their critical and crucial role in bringing together the men of the art, pooling resources to collaborate, investing in risky development processes and creating the next technology the world will love or need. So that such misinformed patent bashing ads never appear again. Patents don’t kill: they enable the development of lifesaving technologies. We have to make that understood by our regulators and legislators. Because if Europe wants to lead the technology race, as expressed in a publication dated January 22, 20220, from the Internal Market Commissioner, it will have to rely on and exploit its patents.