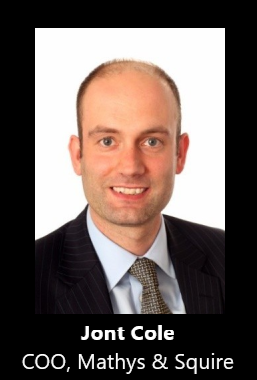 Mathys & Squire explains that the firm’s management board has created the COO role to be responsible for driving forward the firm’s strategic development and growth. The COO will also play a key role in business leadership, improving operational implementation, efficiency and business transformation.

The firm adds that appointing a COO to play a larger role in running the business will allow for senior partners to able to spend a larger proportion of their time with clients and growing the firm rather than dealing with day-to-day operational matters.

The firm’s new COO is Jont Cole, who joins Mathys & Squire from property giant JLL, where he held senior roles including Global Strategic Program Director and COO of its Advisory and Alternatives divisions. At JLL, Jont led the coordination and implementation of the firm’s valuation global data strategy and global technology platform. He holds an undergraduate degree in Biochemistry and an Executive MBA from the London Business School.

Chris Hamer, partner and board member at Mathys & Squire, comments: “Jont’s appointment is a significant step in Mathys & Squire’s strategic development. His influence will allow the firm’s experts to focus on growing the business in the long term.”

Jont Cole comments: “I’m thrilled to be joining one of the leading European IP law firms with a superb reputation in the market for both its legal and commercial advice. I’m looking forward to freeing up senior partner time to serve clients even more fully.”

Founded in 1910, Mathys & Squire is one of the leading full-service intellectual property law firms in Europe, with over 110 years of experience in the protection and commercialisation of IP rights.
The firm has more than 60 qualified attorneys and offices in London, Paris, Munich, Luxembourg, Cambridge, Oxford, Manchester, Birmingham, Brighton and York as well as a team based in China.

Mathys & Squire is a Tier 1 ranked firm in The Legal 500, highly ranked in Chambers UK, and a recommended firm in both IAM Patent 1000 and WTR1000.